The Laney Walker and Bethlehem neighborhoods, near Augusta’s downtown core, were generally characterized by a large concentration of vacant houses and lots. The Augusta Land Bank Authority, through the City’s Housing and Community Redevelopment Department, retained APD-U to design and execute a strategy to assemble these houses and lots to facilitate the foundation of a major neighborhood redevelopment initiative.

APD-U’s responsibility included conducting a detailed windshield condition study to document the location and condition of vacant properties and lots, these results which were mapping using Geographic Information System (GIS). An important component of this work was an overlay to determine the pattern and concentration of vacant properties and vacant lots as a basis for identifying potential catalytic redevelopment sites called Priority Project Development Areas (PPDA). APD-U then set out to realize this strategy through active property acquisition on behalf of the Land Bank, including right-of-way acquisitions, and relocation services. 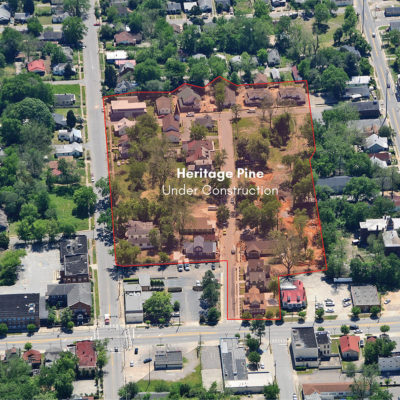